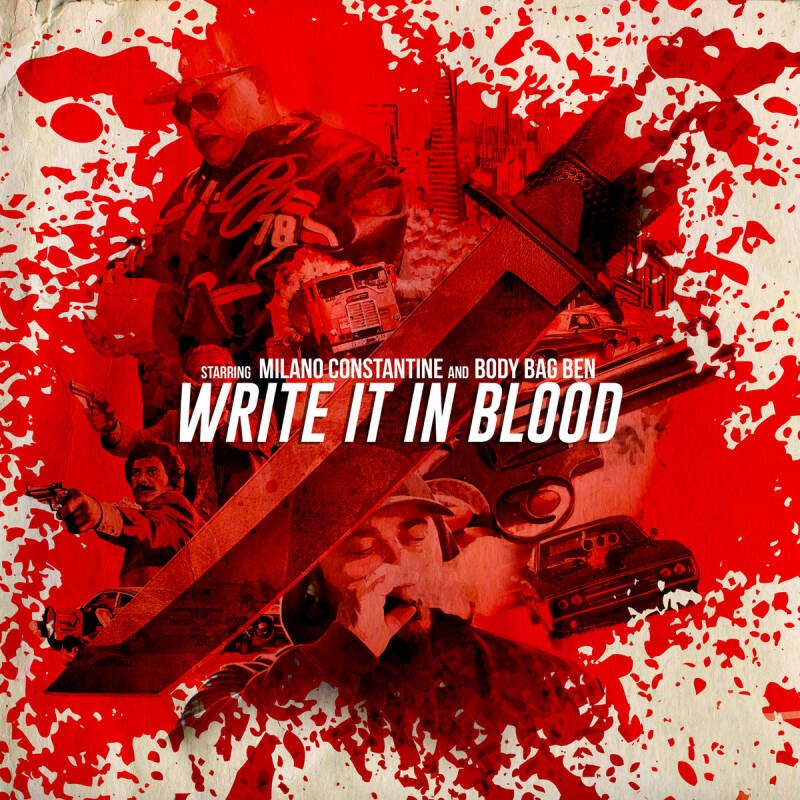 The NYC-CA connection of Milano Constantine & Body Bag Ben deliver that raw, hardbody hip-hop on their new collaborative album, 'Write It In Blood.' The 11 tracks on here were created out of a shared passion not just for the culture, but for creating art as a duo. After working together on Milano’s collab EP with Planet Asia, they both knew they had more to offer as a unit.

While the process of making this album during the pandemic wasn’t easy, it went as smoothly as they could have hoped. “This year’s been tough for everyone and to be honest this project was built so organically that it sounds like we recorded it together in a studio,” BBB says of working on separate coasts. “We definitely played off each other’s energy. He would send his verses, I would send him mine, and it just worked out perfectly.”

That energy is certainly palpable throughout every element of Write It In Blood, a project that demonstrates their gifts as multi-talented artists. They both rap on every track, and handled all of the production as well. Body Bag Ben produced a majority of the beats—”Hell or High Water” is his favorite of the bunch—but Milano got to showcase his talents behind the boards, too. He crafted the chilling beat on the snarling title track featuring Planet Asia, as well as the more soulful “Sparks Steak House.”

It’s only fitting, then, that Milano holds his and Body’s performances on the album in such high regard. “I want the masses to walk through this musical art gallery of emotions and leave saying they witnessed legends like Rembrandt and Basquiat,” he explains. His cohort agrees, adding that he hopes listeners “break their neck rockin’ to these joints!” With such a high level of production and writing on this album, it’s safe to say they’ll both get their wish.

Be on the lookout for even more from these two in 2021 as they both have several projects in the pipeline. All tracks produced by Body Bag Ben, except for tracks 5 & 9 which are produced by Milano Constantine. 'Write It In Blood' is finally available now on CD limited to only 200 copies!